As buyers reported that this website is unstable, in order to improve the customer’s shopping experience, our products have been moved to http://qumypet.com for sale.
If you have any questions, please feel free to contact us. We will try our best to help you.
http://www.qumypet.com

CONVENIENT: Water resistant dog boots keeps paws dry and warm. No more wiping muddy or sandy paws after the rain or snow. NON-SLIP and WATERPROOF: Molded rubber bottom, the dog shoes are made with water resistant material. SECURE: Easy to put on / off. These dog shoes expands with a wide split seam opening and two adjustable and reflective velcro straps to ensure a tight fit, also make your dog safe at night. RUGGED: Tough anti-slip sole of dog shoes provides stability and traction, protection from sharp thorns and hot pavement. Description: This set of flexible dog boots will act as a good partner for them, protecting the paws against hurt from sidewalks, asphalt, grass etc. The sole of the waterproof durable dog shoes is sturdy, flexible, skid-resistant and allows the dog boots to be used indoors or outdoors, in wet and dry, hot and cold conditions. These dog shoes are sturdy enough to withstand outside play, and protect your dog’s paws from stones, dirt and mud. Wide split seam top opening which makes very easy and quick to put on the dog boots. For Cleaning, the dog shoes are hand washable and dried naturally in the air. Please follow these easy measuring instructions to ensure that these dog boots are comfortable fit for your dog. 1,Place the paw on a piece of paper and press down on the top, mimicking how the paw spreads when the dog is walking. 2,Mark the left and right sides on the paper and measure the distance between the marks. 3,The width of the paw should be smaller than the dog shoes size chart. Package inludes: One set dog boots – 4PCS 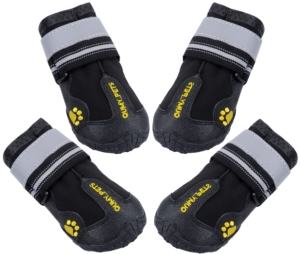 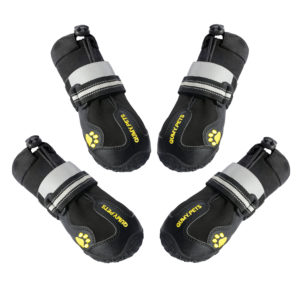 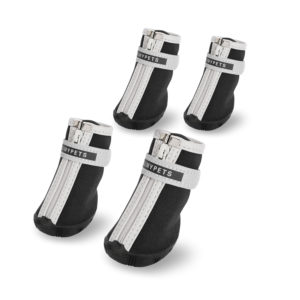